I’ve recently returned from a three-month trip to Los Angeles – part holiday and part networking to get a feel for what the industry is like out there.

It’s not easy and nothing will just fall into your lap. However, if you have the determination and the passion to follow your dreams, then going to LA is worth it.

Having completed the first part of my LA adventure I thought I’d note down my thoughts to hopefully help and inspire others to give it a go.

Part 1 – I love it when a plan comes together

Project LA, as it was dubbed by my family, was a year in the planning. At the end of 2016 I was researching online as to when would be the best time to head out. Unlike the UK film and television industry the American film and television industry is more open as to when new shows are in production. And no time is better for a budding actor or actress than Pilot Season.

However, I would highly recommend going out before pilot season and networking for at least a month. This gives you the opportunity to find out how you would do in the States and also whether or not you would enjoy living there. There is a large expense to going to America, especially if you apply straight away for an O1 Visa. Save yourself any heartache and bankruptcy by trying it out first.

My next stage was to find out places to go for networking. Meetup.com is a great networking tool for Los Angeles. There are all sorts of events on there from Canon Camera, the odd screening, to mixers with people from all walks of the industry. Some of these you can sign up to before you go and get your calendar filled with dates! It’s also worth messaging some of the other people who go and making contact with them. It is always nice to know at least one person before you head over.

Don’t be afraid to use social media! Believe it or not social media is also a fantastic tool for someone wanting to be an actor or film maker. I know others have said this but you can meet folk over social media. I got chatting to a scriptwriter/film maker via Twitter and met up when I got there. Obviously be safe and if you are meeting someone make certain that it is a public place. There are also groups on Facebook for actors and film makers in LA and are worth joining.

The next stage is image and I don’t just mean clothes. You want to be looked at as professional, someone of note. Business cards are a must and if you are lucky enough to have someone design them for you fantastic. If not take your time; after you have left a networking event the business card is a lasting impression with that contact. You want them to get in touch. Good quality card and if you are an actor or actress then a good photograph. A website is another useful tool, you can have a selection of photographs, videos of past work and your show reel on there. It is all very well being a member of Spotlight here but over there many haven’t heard of it unless they have worked in the UK. So a website is great and you can put the link on your business card.

Clothing – You want to make an impression. I took with me some clothing and a handbag from Ness. I didn’t dress the way many girls think they should dress in Hollywood and found many people would ask me where my clothing came from, that it was so unusual. You don’t want to blend in, you want to stand out and be noticed.

Believe it or not but where you stay can also make am impression. I was staying in Silverlake and pretty much everyone there is in the industry in some way or another. My airbnb host is an editor, there was a director next door and just down the road a man who supplies vehicles for film and TV. I’d also advise checking online for good and bad areas and there are websites you can use to check the crime rates in the area.

Getting a car. I would recommend it – hiring is best for a short visit, if you are going out on an O1 Visa I’d say buy one. If you are hiring go for something compact to midsize. They are much more fuel efficient and while gas is cheap there you can burn a lot of it sitting on the freeway! I would also say don’t skimp out and get insurance from the hire car company. I got insurance for the car I hired and it was a good thing too! 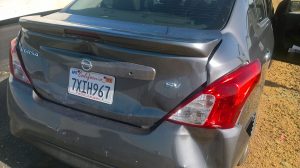 Also remember you need a visa for the United States and you can stay on a holiday visa for up to 90 days. You can easily apply for a visa online.

These are all things that are worth getting sorted early on before you leave. Set yourself a date far enough in advance so you can plan ahead and not get caught out.

And most importantly – Remember to look up some fun attractions to do! It doesn’t have to be all work!