As a Scot living in Cardiff I often have friends visit. While they’re here it would be criminal if I didn’t show them around this vibrant city, and I thought I’d share my go-to attractions for Cardiff!

Disclaimer: I’m a bit mad, and a bit of a geek. Let me know what I’ve missed and what your favourites are!

2. The Cardiff Bay Barrage.  A nice walk connecting the Bay with Penarth and during the summer you can get the Barrage Train across the barrage and around Cardiff Bay.  You can also get various boats across the Bay to the locks which are interesting to watch as the allow traffic in and out of the bay.  It is recommended to do the walk on a warm day as the temperature can differ at Mermaid Quay to over by the locks.

3. Cardiff Castle  It’s a must and you need to go on the tour.  You would not believe some of the rooms within the castle and there is so much history from the Norman, Roman elements to the tunnels used as bomb shelters in the second World War.  Also for those geeks out there Doctor Who, Torchwood and Sherlock have been filmed in the castle.

4. Ok now an eating thing. THE best Italian food I’ve had has to be at Giovannis.  He has two restaurants in Cardiff one that the Sherlock fans will know on The Hayes and one up by the New Theatre. If you visit Cardiff you have to eat there at least once.

5. And finally, the Wales Millennium Centre. Whether you see a show or just go and see the building. It is such a beautiful theatre and building especially at night all lit up. 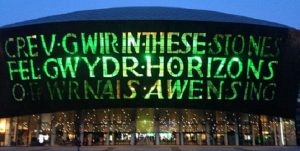