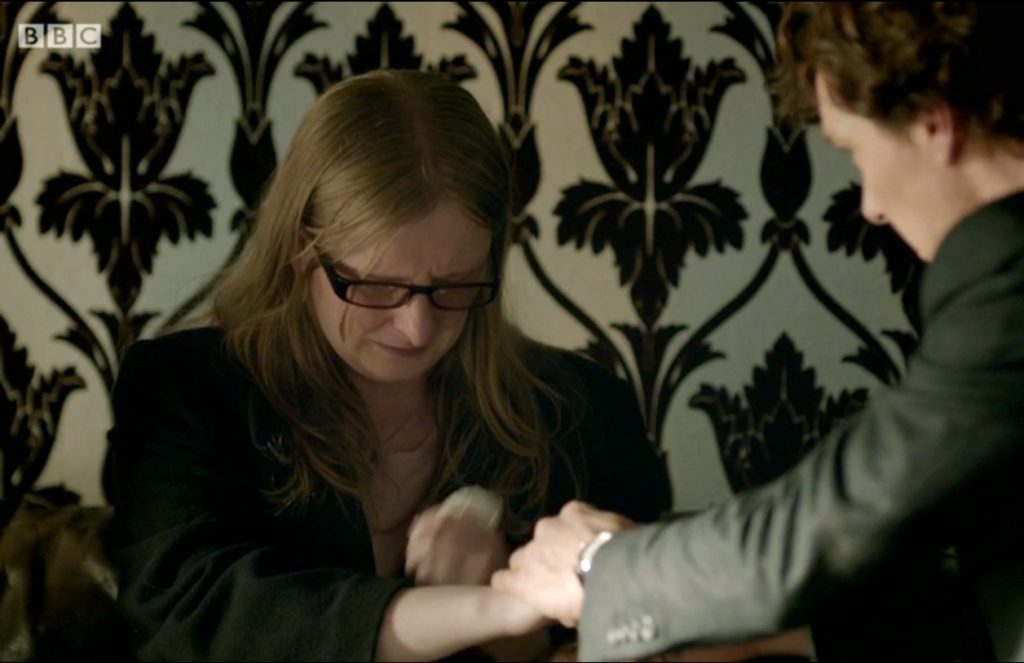 Two years after the devastating effects of The Reichenbach Fall, Dr John Watson has got on with his life. New horizons, romance and a comforting domestic future beckon; but, with London under threat of a huge terrorist attack, Sherlock Holmes is about to rise from the grave with all the theatricality that comes so naturally to him.

Elizabeth plays Miss Mary Sutherland, a wealthy woman whose fiance has recently disappeared. The character is taken from “A Case of Identity”, the third story in Sir Arthur Conan Doyle’s The Adventures of Sherlock Holmes.

Transmitted on BBC One on 1st January 2014; Distributed by BBC Worldwide

“Captivating, heart-stopping and utterly mesmerising this is one of those TV events that is, quite simply, magical, enjoy.” TV Times

“The Empty Hearse couldn’t be more of a treat if it came wrapped up in tissue paper and ribbon and was delivered to each of us individually by the Red Arrows. It’s a playful, funny, exhilarating 90 minute adventure…” Radio Times

“Sherlock has been a spectacular success for the BBC, and the first episode of this new series will only increase its popularity. The acting is superb, the plotting is ingenious, the humour is wry and the production values are sky high. This is a series that does what it does with consummate skill and style.” The Times

“[The Empty Hearse] is packed with explosive sparkle, fizz and wiz and wit.” The Guardian G2

“A challenge to keep up with, a joy to watch – there’s a reason this kind of telly takes two years to make. But oh, how we’ve missed it, and oh how it was worth the wait.” Huffington Post