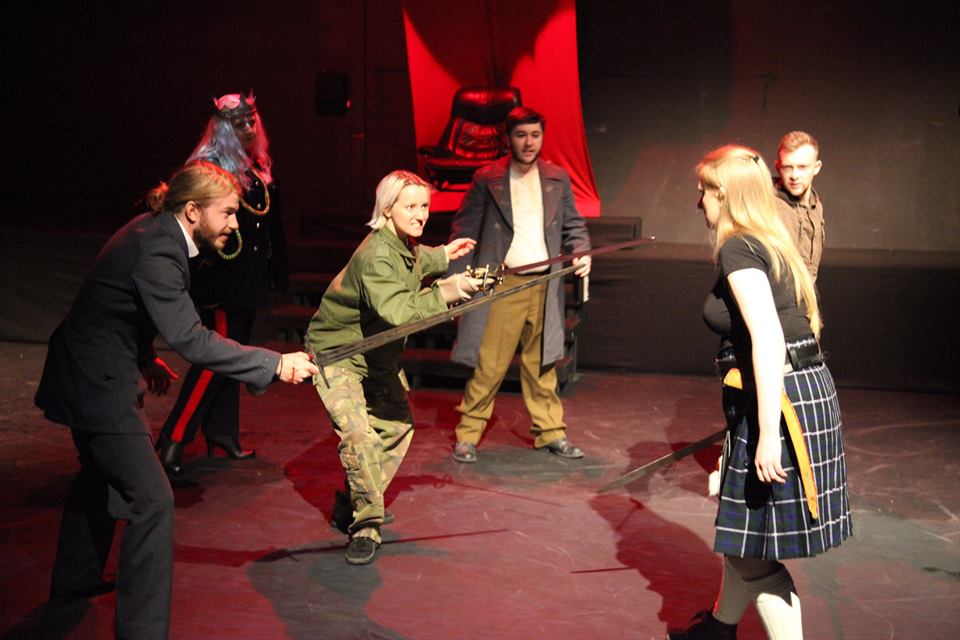 Shakespeare’s Henry IV Part I is the story of power, honour and rebellion.

Elizabeth played the Earl of Douglas in the University of South Wales production of Henry IV, parts 1 and 2.

Richard is dead and Henry Bolingbroke is now King Henry IV. The king is not enjoying his reign. He feels guilty about the removal of Richard and it troubles his conscience. He’d like to go to the Holy Land on crusade to pay penance but there are troubles much nearer to home that need his attention.

His reign is threatened by growing opposition from some of the very nobles who helped him to the throne – especially the Percy Family. Wales and Scotland are threatening rebellion as King Richard’s nominated heir, Edmund Mortimer looms large on the horizon.

King Henry’s suspicious, rude and perhaps arrogant treatment of Henry Percy (the Earl of Northumberland’s son who is known as ‘Hotspur’ because of his courage and impetuous nature) only makes matters worse.

King Henry’s own heir – his son, Prince Henry (also known as Harry and Hal) – is living a dissolute life, frequenting the taverns of Eastcheap in the company of Sir John Falstaff and other disreputable characters.

Hal likes Falstaff but also enjoys insulting and tricking him. He goes so far as to stage a robbery of Falstaff and his fellows just for the sport of listening to Falstaff recount the exaggerated story afterwards. Hal knows he’s not being particularly ‘princely’ but he intends to improve his behaviour when the right moment comes.

Opposition to the king becomes open rebellion, led by Hotspur (Henry Percy) who now supports the claim to the throne of Edmund Mortimer (his brother-in-law).

Father and son are reunited

The rebellion brings Hal back to his father’s side – the moment for behaving more like a prince has come. Falstaff musters a ragged troop of soldiers. Will the king’s army defeat the rebels at the battle of Shrewsbury? And will Falstaff live to die another day?